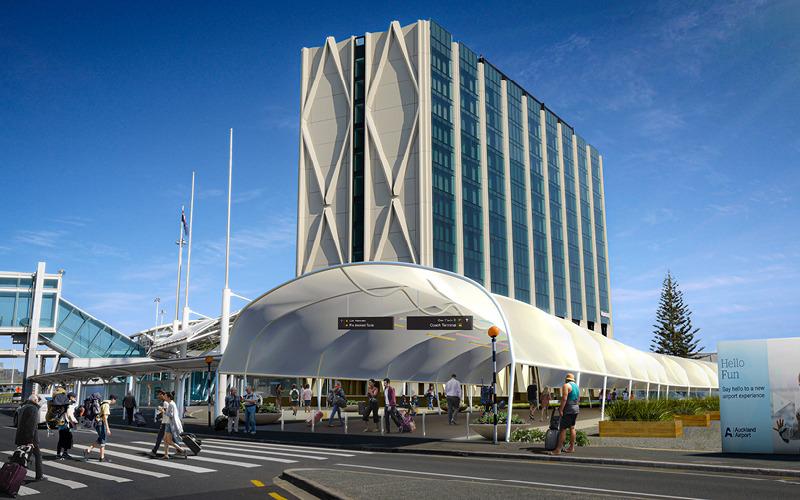 As work begins at the international terminal, a new pathway will take foot traffic through the construction.

A miniature version of The Cloud, the Auckland waterfront events centre, is about to take shape inside the main international terminal car park during the first months of 2020.

Providing rain or shine shelter for travellers and guests, the mini cloud will act as a covered plaza stretching from the forecourt of the international terminal to car parks in Tom Pearce Drive – the current exit road from the terminal.

With some of the car parks and pick-up/drop-off areas closest to the international terminal becoming construction zones during the next three years, creating a high quality, temporary solution was necessary to ensure people had an easy, safe path to and from the terminal, says Auckland Airport Project Manager Jessica Zame.

Constructed from coated galvanized steel frame and PVC fabric, the covered pathway will run through the existing Car Park A at the eastern side of the Novotel Hotel.

“It was an interesting challenge to design for. On one hand we knew the plaza would be a temporary structure, only needed for a few years until construction on major projects around the existing main car park is complete.

“It will be some time before the multi-storey car park in front of the terminal and the western forecourt next to the new expanded international arrivals building are operational, so it was also important to us to make the interim state a pleasant one, so customers have a comfortable walk to and from the terminal.

“The answer was the custom curved structure of steel frame and fabric, a smaller version of The Cloud on the waterfront,” says Jessica.

Covered connections will extend beyond the new pedestrian walkway to passenger car parks, including the multi-storey car park off Tom Pearce Drive, and new coach, rental car, ride-share, and pre-charted taxi and shuttle drop-off/pick-up areas operating during the construction of the expanded international arrivals area and domestic jet facility.

Work on the site begins in January 2020 and will be completed in two stages finishing in June 2020.