Auckland Airport’s airfield expansion project marks the next critical phase of its multi-billion infrastructure development programme designed to revitalise the airport over the next decade.

“This is the beginning of a series of truly transformational projects at Auckland Airport,” said André Lovatt, Auckland Airport’s general manager, airport development and delivery.

“The complete development programme of work we are embarking on will yield some really great benefits and enable us to accommodate the 40 million passengers and 260,000 flights that are expected by 2044.”

The airfield development is the first of eight major infrastructure projects Auckland Airport will commence over the next decade and follows the completion of major upgrades to the international terminal over the last four years.

Over the next three years, more than 250,000sqm of land or about 30 rugby pitches will be converted into new airfield space at the western end of the airport beside the international terminal. This will add more than 18 per cent surface area to the airfield.

This project is one of Auckland Airport’s single largest capital investments in the airfield since it was built in 1966. It will deliver an additional taxiway, extension of an existing taxiway and development of six remote stands for the parking and servicing of aircraft.

The taxiways will improve aircraft movement around the airfield and will eventually link between the current runway and the future second runway.

The remote stands will provide space for aircraft that layover for several hours before departing again and will have in-ground jet fuel reticulation.

Combined, these projects will provide some additional airfield capacity to allow the relocation of existing aircraft activities, when the development of the future domestic jet terminal takes place.

The new airfield will be built to specifications to accommodate the world’s largest passenger planes with a wingspan of 65m to 80m.

“Auckland Airport is working hard to grow New Zealand’s success in travel, trade and tourism, and this project is a critical piece of the puzzle in enabling our future masterplan,” said Mr Lovatt. “The remote stands are designed to give us some head room, so that one day they can become physically connected gates to the terminal, as growth in airline and passenger numbers demands it over time.”

Construction company CPB Contractors (a New Zealand CIMIC Group company) has been named as the preferred contractor for the project and earthworks are expected to begin mid-year and be completed by late 2021.

The eight anchor projects are the foundation of the overall programme of work Auckland Airport is undertaking to develop transport, airfield and terminal infrastructure. 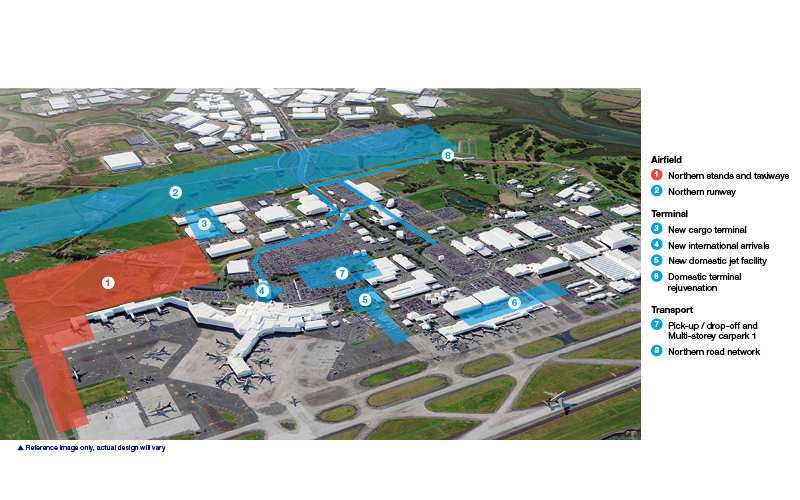