Learning in peace and quiet

The classroom will soon be a much quieter place for pupils at two Manukau schools near the airport. 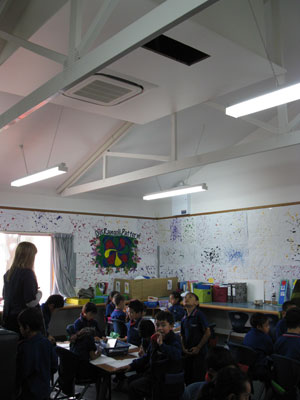 Chapel Downs and Papatoetoe South primary schools are currently undergoing construction as part of Auckland Airport’s Acoustic Treatment Programme, which will reduce aircraft noise levels when children are inside learning.

The programme is part of the airport’s committment to minimising the impact of aircraft noise in the local area, a feature of its obligations under the Manukau District Plan.

Kate Gullery, environmental planner at the airport, says the programme funds the cost of new ventilation, insulation and windows in classrooms, school halls and libraries, to reduce noise. “It’s a positive project to work on because it benefits the schools and the community,” she says.

Three other schools in the area have already been acoustically treated. One of these is the Seventh Day Adventist primary school on Puhinui Road.

Since its upgrade, teachers have reported that pupils have increased concentration levels due to a controlled temperature in the classroom and reduced noise, a fantastic outcome for everyone involved.