Stepping up for Leukaemia

Walking up the down escalator might not be the most effective way to get to the second floor of Auckland Airport’s international terminal, but it’s a great way to raise money for the Leukaemia Foundation.

On May 5 and 14 Auckland Airport Rescue Firefighters will take to the international terminal escalators, alongside their New Zealand Fire Service colleagues, to train for the Firefighter Sky Tower Challenge.

Last year 365 firefighters from all over the world took place in the Sky Tower challenge raising $150,000 for the foundation which offers advocacy and education to people affected by blood disorders. This year it took just 17 days for 420 firefighters to register.

The event will be held on 22 May. Challenge organiser and firefighter Tony Scott says the middle escalator of the international terminal will be used for training with firefighters taking turns of about five minutes each.

Other firefighters are available to collect donations and answer questions. Scott says people might not put money in the bucket at the bottom of the escalator but they see the effort the firefighters are putting in and will make a donation at the top.

The average speed is about 72 steps per minute, Scott says. The Skytower Challenge record is nine minutes and 40 seconds for a firefighter wearing 25kgs of equipment. 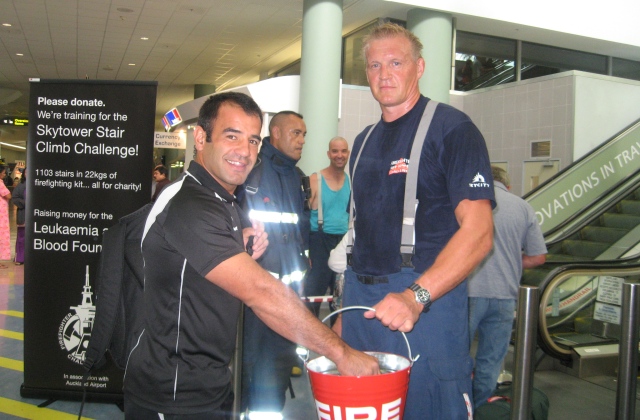