On the third day of Christmas

On the third day of Christmas, Auckland Airport’s travellers donated to me… $10,000 for Refugee Services Aotearoa New Zealand

Auckland Airport today continued its 12 days of Christmas charity donations that will see $120,000 given to NZ charities by Christmas Eve.

The donations, made possible by the generosity of Auckland Airport’s travellers, have created a great deal of interest with over 300 charities applying for a slice of Christmas cheer. 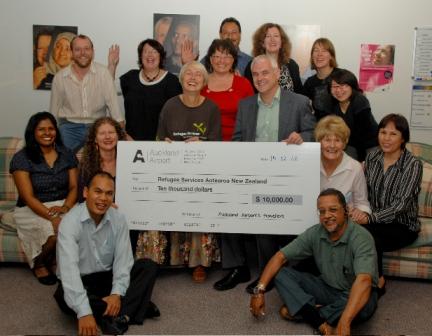 They are a not-for-profit committed to supporting the successful resettlement of former refugees within a welcoming and inclusive society. Since 1975, they have assisted more than 40,000 refugees to settle and build new futures here in Aotearoa New Zealand.

Jenni Broom, National Manager Client Services for Refugee Services, said, “We are extremely grateful for the recognition of our work from Auckland Airport, and for the generosity of those travellers whose donations have made this possible. We believe that all travellers empathise with the plight of vulnerable refugees and would be pleased to see their donations put to this use.”

The $10,000 donation will be used to raise awareness, and attract and train more volunteers for the Volunteer Training Programme across all eight of the Refugee Services offices around New Zealand.

Donations made so far…