On the 10th day of Christmas

On the 10th day of Christmas, Auckland Airport’s travellers donated to me…$10,000 for the Life Flight Trust!

The donations, made possible by the generosity of Auckland Airport’s travellers, have received an enormous amount of interest, with the 12 chosen charities selected from over 300 applications. 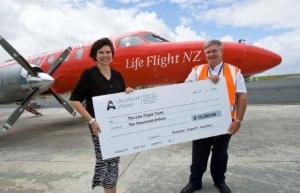 With bases in Wellington and Auckland, Life Flight provides an around-the-clock air ambulance service across New Zealand. This summer alone at least 360 people, four every day, are expected to require their life saving assistance, 30% of these will be children.

“It is not possible for every hospital in the country to have the specialist medical teams and equipment required for all types of emergencies. With a health system built around five main tertiary centres, New Zealand’s unique topography and its relatively small population spread across the North, South and Chatham Islands means that air ambulances are essential”, said Ian Lauder from Life Flight.

Chief executive officer of Auckland Airport, Simon Moutter, said, “It is fantastic to support this important life line. Life Flight has a base at Auckland Airport so we regularly see the air ambulance transporting the critically ill. It’s an invaluable service and one we are proud to donate $10,000 to on behalf of our travellers.”

Life Flight is dependent on financial support from the public to ensure that the aircraft, aero-medical equipment and specialist medical staff required can be there when needed. Without this support the service simply could not operate.

“We are privileged to work with a marvellous team of doctors, nurses and crew who cumulatively have over 75 years of experience in the ambulance sector. This team has played a major role in the lives of so many New Zealanders from Kaitaia to Bluff. It is amazing what a difference the accumulation of several donations makes to one person’s life and we would like to thank Auckland Airport, on behalf of the benefactors of this service, for making this donation of $10,000,” said Ian Lauder.

Auckland Airport’s 12 days of Christmas continues every day until 24 December, with a new $10,000 charitable donation made daily.

Donations made so far…